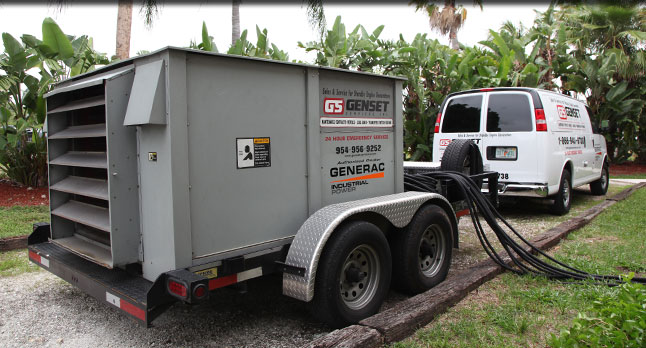 Wet stacking is a condition where unburned fuel and carbon accumulate on post combustion internal engine parts (pistons, cylinders & exhaust valves) and the entire exhaust system including the turbocharger. It comes from running a diesel engine at only a small percentage of its rated capacity and not allowing it to completely burn-off all of the fuel. The incomplete combustion also adds an equal amount of carbon as well. It is visually detected by the appearance of black ooze around exhaust pipe connections and around the turbocharger. Also, continuous black exhaust from the stack when under a constant load is also an indication that all the fuel is not being fully burned and coking and wet stacking may be taking place. Medium voltage load banking is recommended to alleviate this issue.

The effects of wet stacking range from the build-up of carbon on your valves, valve guides and the turbo impeller causing hot spots or the burning and ultimate premature failure of these components, to unburned diesel fuel diluting the engine lubricating oil by washing down the cylinder walls and causing premature wearing and failure of rings or the engine bearings.

The accepted and recommended solution is to perform load banking on an annual basis. In a nutshell, the load bank is a trailer mounted variable resistive electrical load that is connected to the generator. It allows us to precisely meter the load on the generator and or engine and it allows us to slowly ramp (heat up) the load up to 75% or more and down on the cool down phase. Traditionally, any diesel generator that only runs at 30% or less of its rated capacity should be load banked. In many situations, this is governed or dictated by NFPA or AHCA standards. The following hyperlink will show you one of our maintenance videos that explain load banking in further detail.